I love the concept of “accepted in the Beloved.”  This is a little gem out of many in the Bible.

5 having predestined us to adoption as sons by Jesus Christ to Himself, according to the good pleasure of His will, 6 to the praise of the glory of His grace, by which He [a]made us accepted in the Beloved.

7 In Him we have redemption through His blood, the forgiveness of sins, according to the riches of His grace 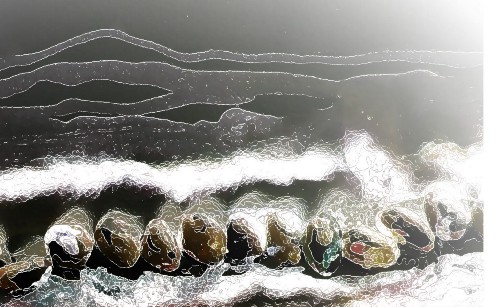 The freedom of being accepted in the beloved may sound churchy and pious– like a liturgy of the day.    But to me it is not “religious”, but a principle of life.

If you find yourself in the hands of The Potter, it is by no effort of your own.  In fact only the sub-pious qualify to receive the riches of His grace.

I have come to believe that while the work done on the cross happened in what we consider to be the beginning of current time,  we cannot capture in any time frame the un-measurable intent of the God I know to reach out to an imperfect human race.

God IS.  No time frame.  So before we can imagine there was this Fierce Force.  He says I AM in the beginning of the Old AND the New Testaments.   Before there were letters and words, He IS.

I started looking for him early in my life.  There was the teaching of “Now I lay me down to sleep” in our house.  But had I grown up in a house of different sorts of prayers it would still be true that I was a seeker from very early on.

Our books in the house consisted of a pretty Psalms of David given to me by aunt, and a really old small print bible with yellowed pages in which The Lord was always written Jehovah.   I am still not sure just which version it was,  but that was where I started searching with pencil in hand.

Quaker Meeting First Day School (that’s what the Society of Friends call Sunday) taught songs of praise and thanks for the My Father’s World,  and we children made Christmas scenes of the Stable and Personnel of the Birth of Christ.  We sang traditional Christmas carols,  mostly those rooted in the European religious tradition, around the piano.

But all of this did not provide me information about that word “faith” that tolled like a bell throughout the New Testament Gospels and the Letters.  The scripture simply said that without faith, you cannot become a child of God.    Well, where do I get this faith? That was my question.

I searched in nature, to be sure.  And within my nurturing family and extended family I had a solid feeling of the existence of God.  I was not a heathen I was told by my mother when I worried about whether I was a person of faith or a heathen.  She suggested that I was a Pagan, I was so wrapped up with nature all the time.

“Seek and you shall find,” said the scriptures.   Well I did a LOT of seeking and I found out a lot,  but still was unsure of what “faith”, that sine qua non, really was, and how I was to get it.  I tried really hard.   I even “wrote” some bible stuff myself to see if I could.  {This, I later learned, is a sketchy thing to do unless one wants to start a new philosophy.}

Curiosity seems to want to kill the cat.  At least this cat-like curious person would not quit hammering away at this question– even through college years and early marriage.  I tried very hard to do things “right” and to look for that knocking at the door of the parables.

But it took almost being killed for me to quit trying to solve this myself.  I had really given up by the time I sat in a little church in Phoenixville PA and heard a soft spoken pastor say that we can bring nothing to God when it comes to faith.  We cannot get faith by efforts of our own.  It must be given to a willing recipient.  As a transaction where the receiver comes as an empty vessel.

I sat there and weighed the options.   Should I jump off the nearest bridge.  My life had become hell on earth, actually.  I was exhausted.  And giving up.

Giving up seems to be what does the job, at least for this determined soul– because I gave myself up to the earnest invitation and visualized myself pushing off from a river bank into unknown waters, not minding what might come of whether I would like it.  But just to put myself in the Hands of God that way.   It was a transaction.  I said the words clearly  in my mind and then rested.

I told no one!  But things changed right away.  There was a new song going on inside me and it was spiritual.  I have not been the same since.

I didn’t DO anything.  God had done it all.  He was just waiting for me to be ready to ask.

To think The Lord would be swimming alongside in that strange river!  The River is Him!

Still a Nature Person,-my church is the air that surrounds me.  The music goes on inside as God talking all the time, all the time, all the time (Rosilind Rinker prhase)..  My stumblings are not off-putting to the Person who already paid the price.  He loves me as part of Himself.   I am accepted in the Beloved.    It changes everything.

One thought on “Acceptance”